[2] Reflects persistent misunderstanding of the purpose of the GAM, that the code is used to determine project selection and funding.

The GAM results have been steadily growing since it was introduced in 2018,   Based on 8000+ forms submitted and significant consultation, the GAM questionnaire will be revised and SHORTENED in Q1 2020 to make the process easier for users, and to improve the quality and utility of resulting data.   The revised questionnaire will include questions to identify projects serving people with disabilities.

Based on the 10 000+ forms submitted for 2019 and 2020 and significant consultation, the GAM questionnaire is being revised in Q1 2020 to make the process shorter and easier for users, and to improve the quality and utility of resulting data.

The GAM V.2 questionnaire (still draft) includes questions to identify projects serving people with disabilities.  Questions yielding unclear / similar data will be combined or eliminated, and all but one narrative description will be optional.  The new questionnaire is 25% shorter.

Questions regarding projects tailored for women and girls, and those aimed specifically at transforming gender relations have been revised to enable clear identification and tracking of such projects.

GAM Results (Definitions) will be revised to read: 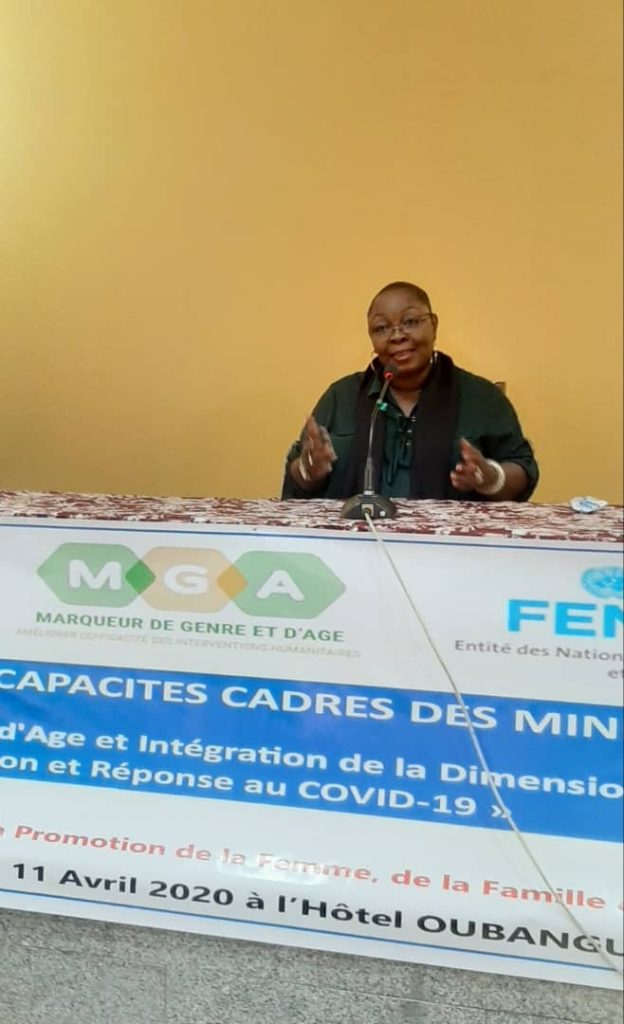 Ms Aline Gisel PANA, The Minister for the Promotion of Women, the Family and the Protection of Children pleads for the promotion of the MGA tool and the integration of gender in the whole response process to COVID-19. April 2020, Bangui, Central African Republic.

Congratulations to the users below who have applied the GAM in the design of 10 or more projects in countries where they work: 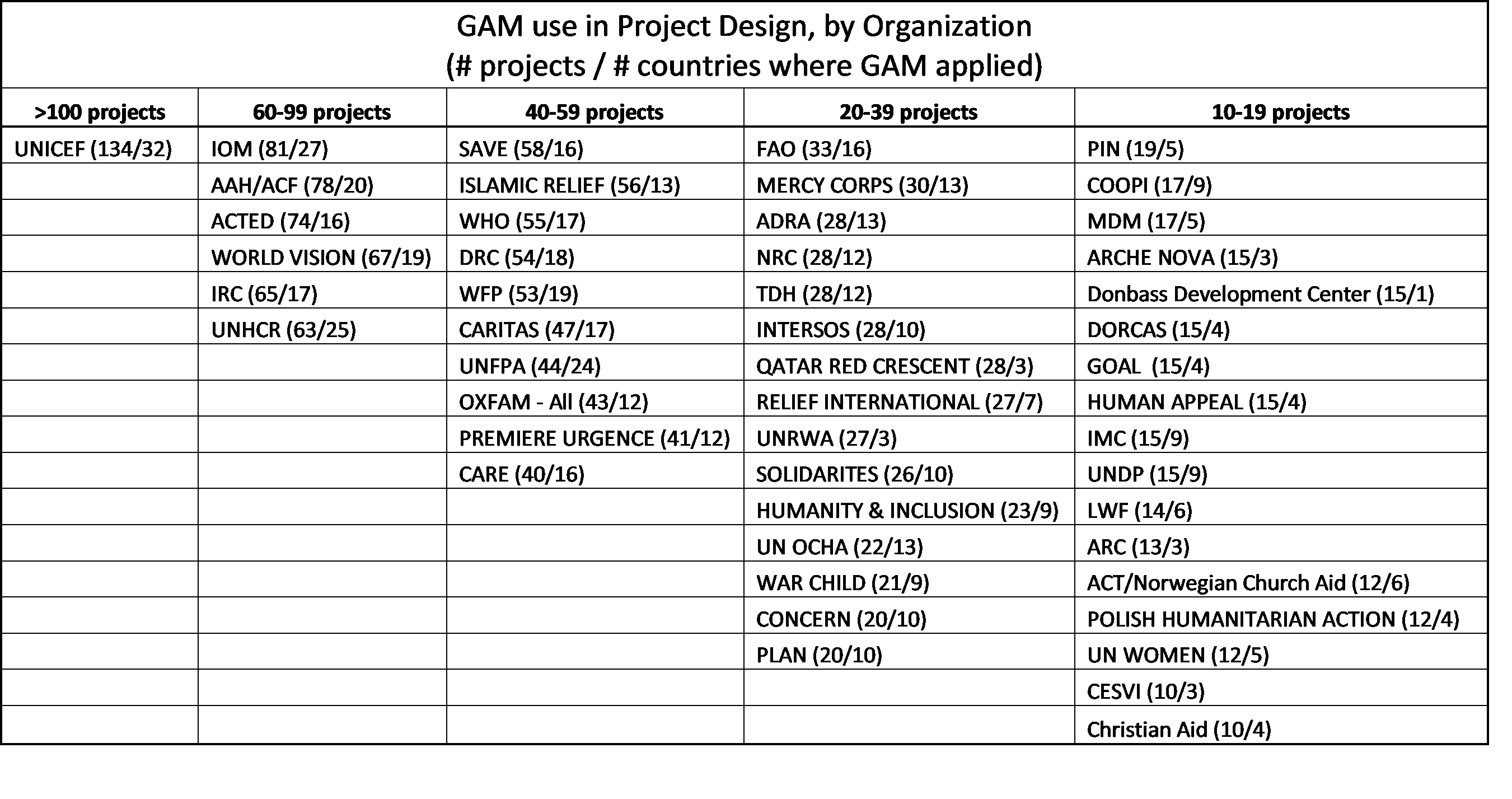 The Gender with Age Marker: not just a humanitarian tool

Our OCHA colleague, Martin Winkler, Associate Humanitarian Affairs Officer in the occupied Palestinian territories (oPt) explains to an audience that is not yet familiar with the marker how the GAM works, beyond a humanitarian setting:

Medecin du Monde in Ukraine found the GAM very helpful in drawing their attention to important program aspects that had been overlooked in project design.  One of these was a feedback and complaints mechanism that the GAM indicated was lacking, and which they subsequently developed.

Inside the clinic, staff now proudly display an information board with feedback forms and complaint forms, and a suggestion box.  They explain the different ways for people to provide feedback including through email and the post office, where the provide prepaid envelopes for convenience.

Examples of problems they learned about through this accountability mechanism included incorrect sizes of medical equipment being provided, and poor patient reception provided by a secondary hospital.  These were consequently addressed and resolved. 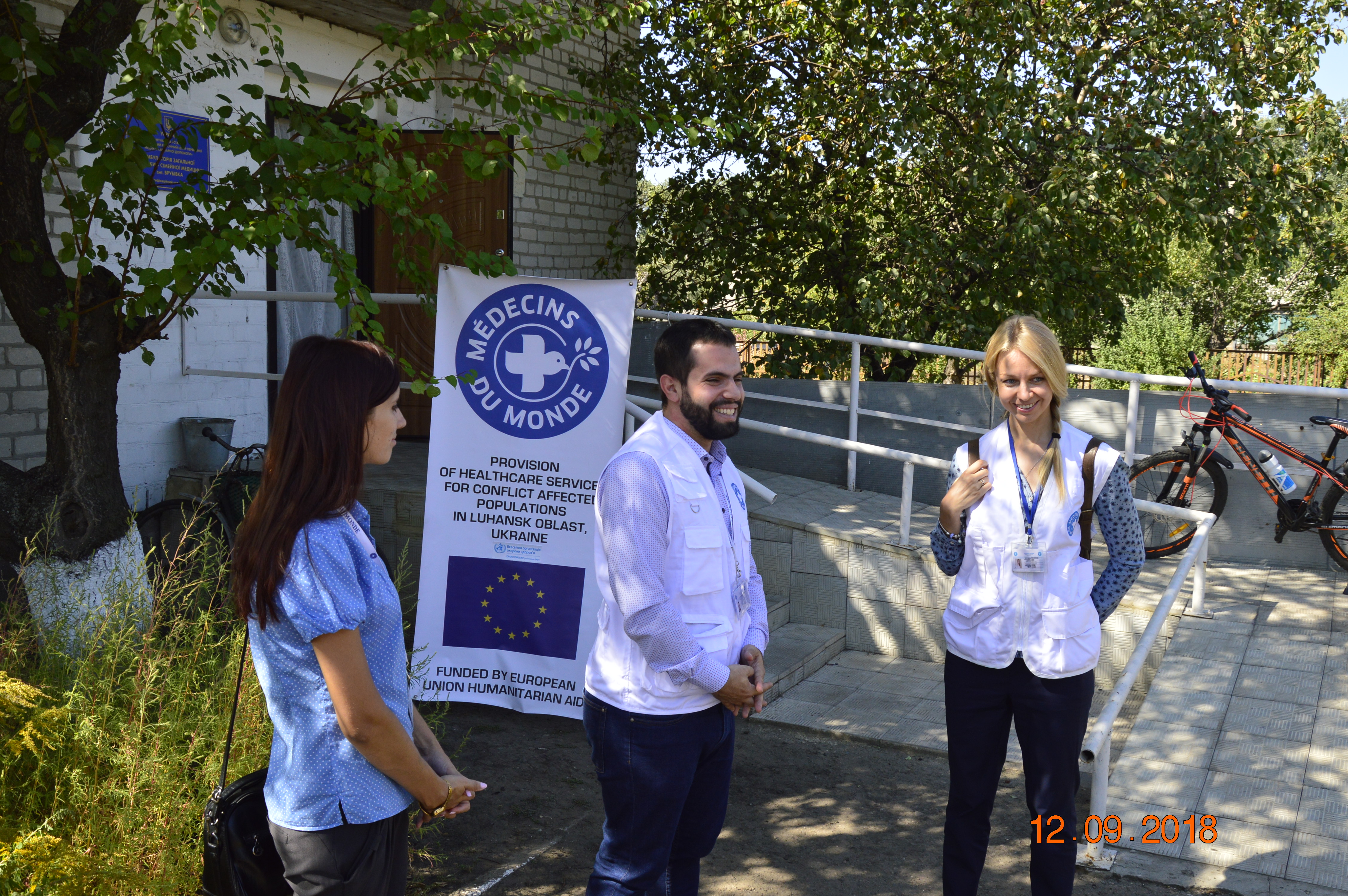 Staff appreciate that the GAM ensures inclusivity of different age groups and checks for equality in services provided to women and men.   They found it simple to use, saying, “It’s multiple choice questions, so it’s very easy if you have the information available; but the point of the GAM is really when you don’t have information, that’s how it helps you to identify the gaps.”

Medecins du Monde in Ukraine will continue using the GAM to design and monitor programs, saying its components and questions are an easy way to identify problems, check quality, and take action to improve.

Right now they appreciate that the GAM was the reason they developed and implemented a feedback mechanism.  This not only contributes to improved health services, but also increases staff motivation by bringing them lots of positive feedback too.

The GAM in practise

Rachelle Elien, Head of OCHA Sub-Office in Chad, piloted the GAM in Haiti:

In December 2019, a great group of colleagues from Francophone West and Central Africa gathered in Dakar for the GAM Leaders training with Deb, Delphine, JB and and Chris.

This GAM Leaders training for Francophone West Africa has been replicated by participants in their home countries in 2020.

In December 2019, the refugee Sector Gender Focal Points Network of Jordan, which is chaired by UNHCR Inter-Sector Coordinator, jointly organized with Gender and Cash Capacity Advisors a full-day workshop to roll-out the Gender with Age Marker tool in Jordan. Around 70 gender experts from government ministries, UN and NGOs participated to join the efforts to enhance humanitarian activities to be more gender and age responsive and committed to apply the tool into their programming, create awareness and build capacity on Gender in Cash programming. 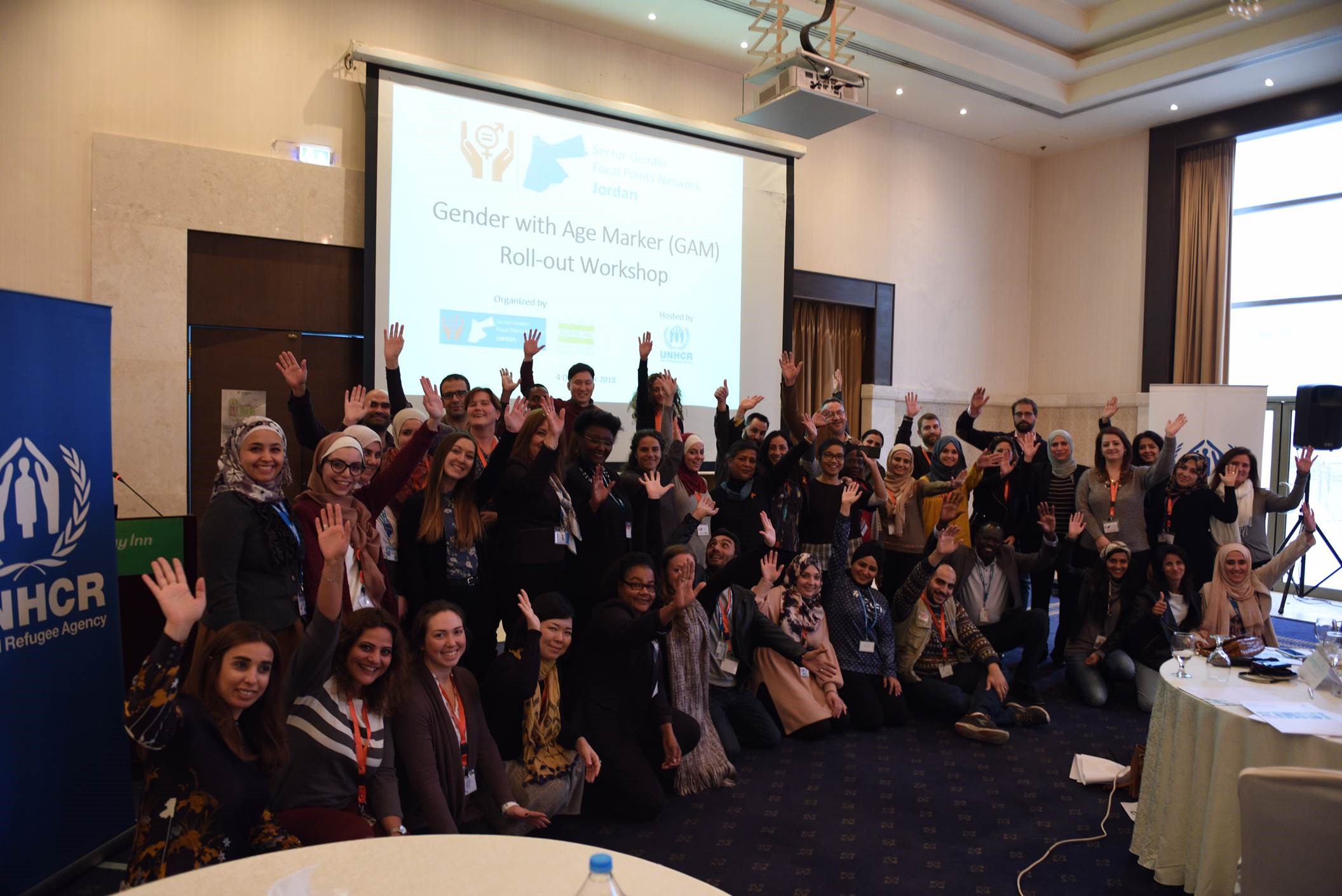 On November 2019, the Gender Senior Adviser finished two GAM trainings. One was a day long training with the Humanitarian fund staff and the second was with 21 gender focal points from agencies and sectors.

OCHA trained 8 cluster coordinators, 5 officers from the health cluster as well as 25 people in Kirkuk from the following sectors: Protection, WASH, Health, GBV, Mine action, Cash Working Group, Shelter and Education. 54 participants were trained on th GAM in Dahuk.

OCHA and UNICEF teams held a GAM session on Friday 19th October 2019 in Tunis. They trained approximately 35 people from UN entities and international NGOs for the Libya operation. 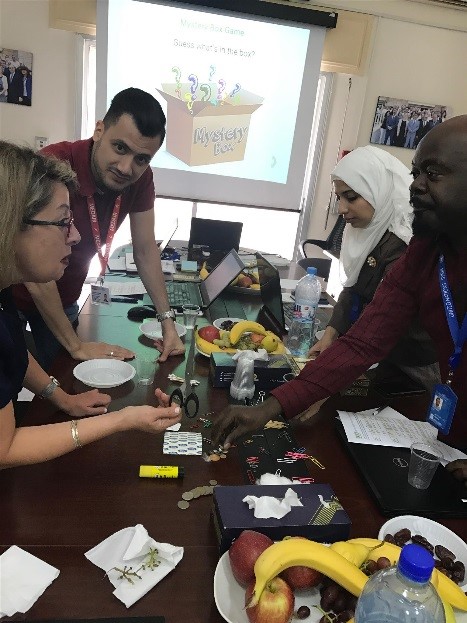 With the objective to strengthen skills necessary for Damascus-based partners to apply the Gender with Age Marker (GAM) tool in future programming, specifically in the HRP, OCHA in collaboration with sector coordinators, and the seven GAM trainers conducted a series of training to realize this objective. In the period of Aug.15- Oct 10 2019, 13 GAM training have been conducted for ISC (1), sectors (9), Gender working group (1), Syria

” The GAM is useful because it really makes us rethink giving blanket response: it is actually true that needs of the different age groups and the different gender groups are different and cannot be addressed by the same activities.”  – Project Designer in Northeast Syria 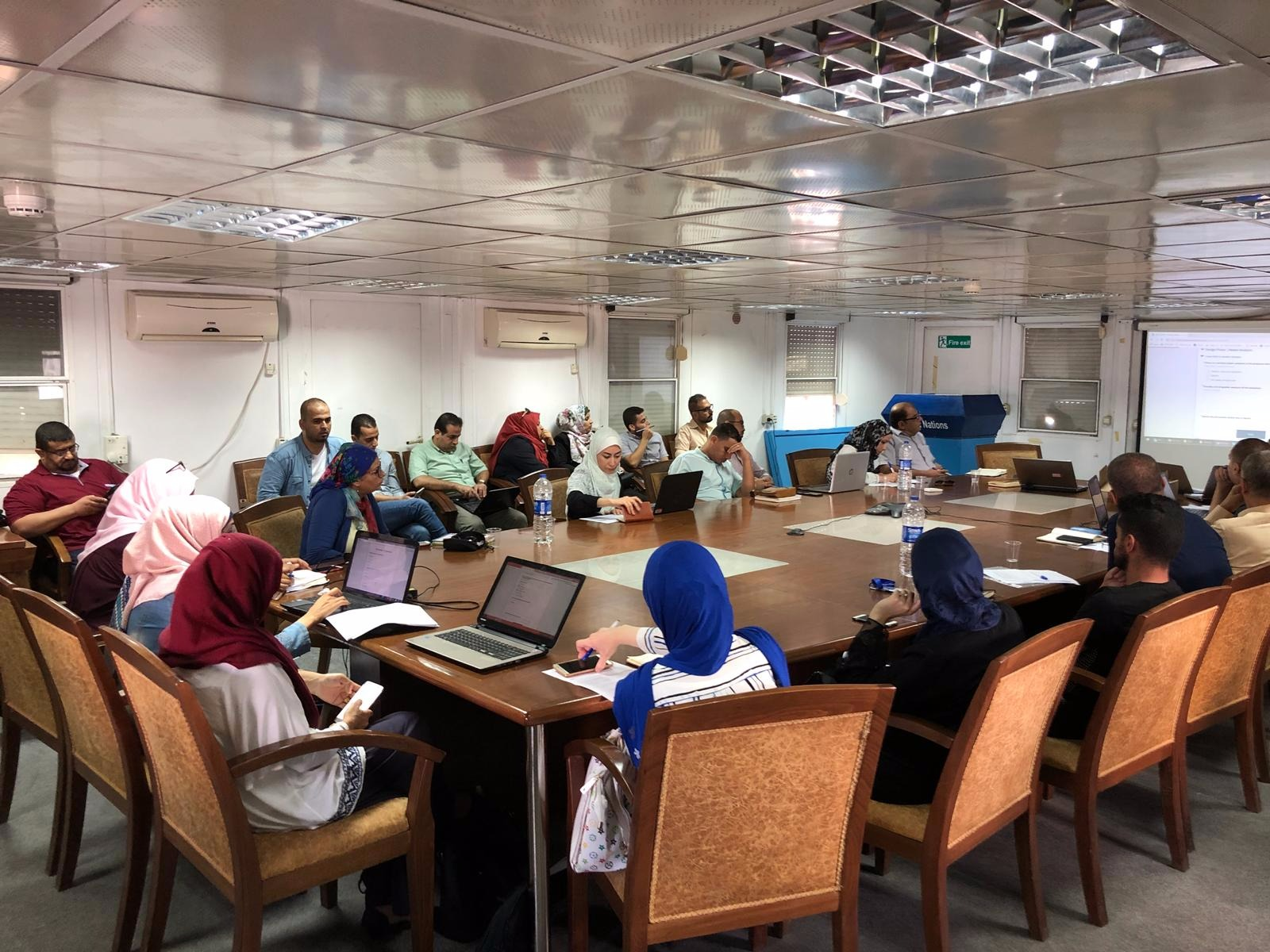 Capacity building on gender in programmation

UN Women Cameroon conducted a capacity building session on gender and programmation in Maroua with 40 participants from UN Agencies, NGOs and SCOs, including the heads of programme and M&E. The main objective was to facilitate inclusion and use of the Gender Handbook and the Gender with Age Marker for more effective gender responsive programming, especially in the upcoming HNO-HRP 2019.

A main focus was on the importance of sex and age disaggregated data to support the data collection and analysis, and on gender sensitive objective and results indicators. During the workshop, a set of gender-sensitive indicators were produced according to the context by the participants. The participants learned to use the Gender with age marker by practical exercise online.

A similar training will also be conducted in Yaoundé. 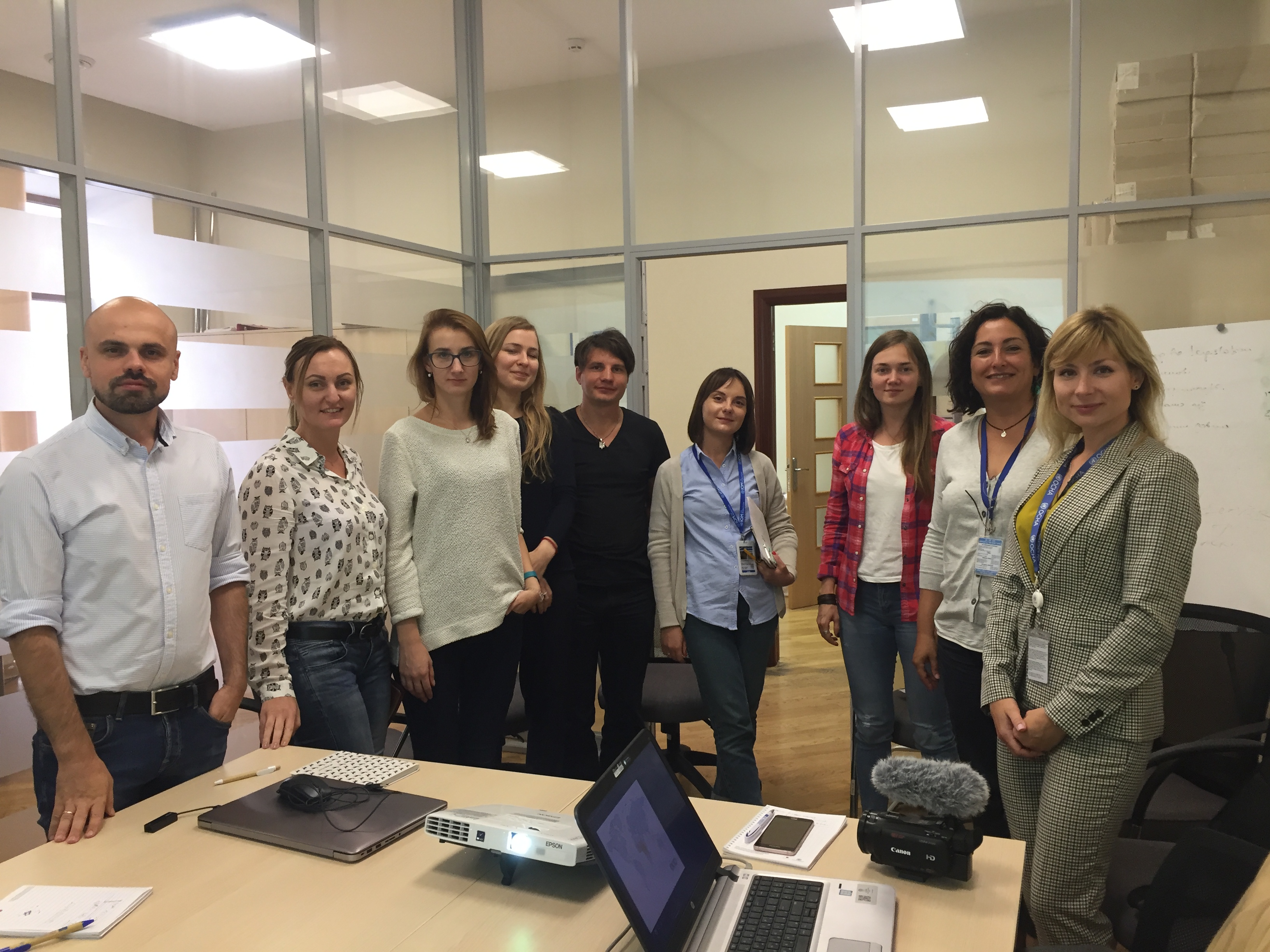 In September 2018 the Gender with Age Marker team carried out a one week mission to Ukraine in September to document the implementation of the GAM. NGOs and partners have been using the GAM extensively at the design phase and some others – such as Medecins du Monde – at the monitoring phase. Humanitarian staff reported that they find the GAM easy once they know their project well. Several partners have been improving their projects according to GAM results.

The GAM team together with the OCHA Gender Focal Point conducted 7 training and met with more than 50 head of offices, programming staff and INGO colleagues to discuss GAM implementation.

On September 5, 16 staff from the ISC group, including 4 who Training of Trainers participants, took part in a 2h30 session on the GAM tool.  Participants included representatives from 8 clusters including Food, Education, Protection and Shelter. The orientation session included a hands-on orientation and a discussion of GAM results.

Launch of the GAM in Eastern Chad

40 humanitarians took part in a 4-hour orientation on the GAM tool in Abeche on 29 August.  Participants included representatives of cluster lead agencies, government, local and international NGOs; a further session is planned for Heads of Agencies, key programme and monitoring staff.   It was successful in spite of technical problems that highlighted the importance of tools and materials being available and fully functional in French.  (These issues have been since addressed!)  The HPC planning workshop in Abeche included a day on combined topics of PSEA, AAP and the GAM.

Changes and updates to the site are underway. We welcome your feedback, including translation suggestions.